A complex legal maneuver by Moreno Valley could stop development of the March LifeCare medical campus by questioning the validity of an agreement with its developer.

The city has sued the state finance director and controller, the Riverside County auditor and the March Joint Powers Authority. The suit alleges the authority improperly took over managing the obligations of its former redevelopment agency, and therefore, changes it made in 2012 to an agreement with developer Donald Ecker’s company, March Healthcare Development, weren’t legal.

The changes gave Ecker more time to meet his obligations to develop the 144-acre medical campus that would include a hospital, medical offices, shops and a hotel on former March Air Force Base property. Without that extension, Ecker would have been in default of his original agreement, March JPA executive director Lori Stone said Friday, May 10.

One Moreno Valley city councilman suggested the suit may reflect some city officials’ view that the project could hurt a similar plan by developer Iddo Benzeevi. In 2011, city officials pledged $75 million in road improvements to serve Benzeevi’s proposed 200-acre medical campus, which would be similar to the March project but would not have its own hospital.

Stone said she would not comment before speaking with the authority’s attorney. The JPA board is scheduled to discuss the suit behind closed doors Wednesday, May 15.

In the suit, the city argues that JPA members “abused their discretion by arbitrarily and erroneously approving” the amended agreement with Ecker. 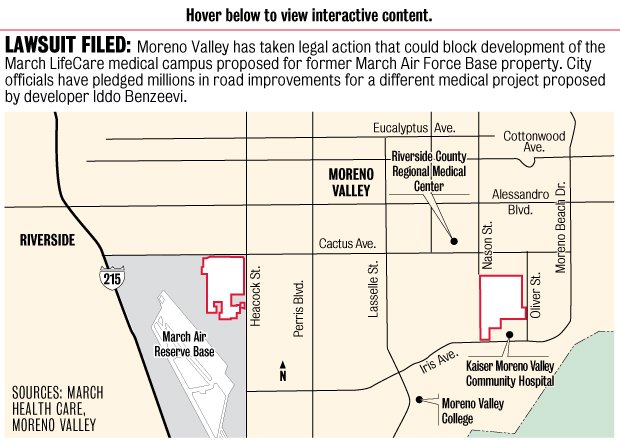 The lawsuit does not challenge the original development agreement between Ecker and the JPA’s redevelopment agency, but if it succeeds, that agreement also could be questioned.

Stone said that had Ecker gone into default, he would have been given time to fix the issues before steps were taken to end the agreement. But Moreno Valley’s suit alleges the JPA can’t legally take over for its former redevelopment agency, so it’s not clear who Ecker would negotiate with if the city’s argument is correct.

He said as a member of the special board that oversees the JPA’s former redevelopment agency, he would like to see any potential legal issues resolved before Ecker’s development moves forward.

“You don’t want to have that hanging over your head,” he said.

Stewart added that the suit could also be taking aim at March LifeCare because it’s proving to be a direct competitor of Benzeevi’s project. The March development and the site of Benzeevi’s proposed campus are a few minutes’ drive apart.

Stewart has previously said the two projects could exist without competing, but said Friday he was wrong.

“My feeling is that maybe the real motive behind this (lawsuit) is to derail the whole (March LifeCare) project,” he said.

State Finance Director Ana Matosantos is named as a defendant because her department signed off on the changes to Ecker’s development agreement as part of the dismantling the JPA’s redevelopment agency, the suit alleges.

Finance department spokesman H.D. Palmer said he’s not aware of any records showing the state approved changes to the agreement with Ecker. He has asked the city for clarification.

“We are somewhat at a loss as to why this lawsuit has been brought in the first place, because the actions that the plaintiffs claim that we took … are actions that we did not take,” he said.